Bella Thorne is finally shedding her cute Disney image. The actress opens an account on the OnlyFans fan page and shows herself to users willing to pay more privately than ever. And it has already paid off for her: on the very first day she was able to earn an unimaginable sum.

From teen idol to OnlyFans celebrity: With Bella Thorne (22), another celebrity has acquired an account on the social media platform for adults. Since last week, users have been able to subscribe to their content there for $ 20 a month.

In a short, auspicious Instagram teaser in which she can be seen in a lascivious pose and wearing a « sex » necklace, Bella Thorne advertises her OnlyFans site. The video promises a lot of bare skin and uniquely intimate insights. But what exactly do you get from the former Disney star on the subscription platform?

Custom videos, private messages, exclusive webcam appearances and many more. Bella Thorne has never revealed so much about herself before. Above all, she has never presented herself so sexy and revealing before.

And it’s hard to believe: OnlyFans has already paid off for the 22-year-old – more than worth it. She earned an insane $ 1 million on her first day on the platform. In just one day. In just 24 hours. And after a week it was already 2 million US dollars. You can’t really believe it. 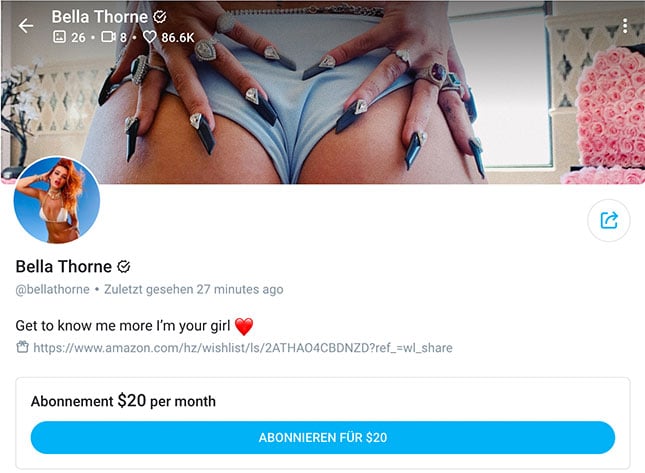 A spokesman for OnlyFans confirmed that Bella Thorne was the first celebrity to have made so much money on the platform in such a short period of time. The actress told Paper Magazine her motivation to publish content not only on Instagram and Twitter, but now also on a paid fan page: “OnlyFans is the first platform where I have full control over my image. Without censorship, without judgments and without being criticized for simply being me. «

Clear announcement: There are no nude pictures!

It can be assumed that Bella Thorne had something very specific in mind when she made these statements. An incident from her recent past, namely.

The actress was threatened and blackmailed by a hacker last year – for nude photos. Instead of accepting the demands, she leaked the photos herself.

Since she can live her life freely at OnlyFans and decide for herself what people get to see of her, the control there is entirely up to her. She can do what she wants. And – that is also important to her – earn as much as she wants. In this way, she wants to avoid unpleasant incidents like the one with the hacker in the future.

One downer for her fans shouldn’t go unmentioned: Bella Thorne won’t be seen completely naked even at OnlyFans. She writes on Twitter: “Clear nooooo. I do not publish any nude pictures !!! «

Bella Thorne, who became known through the series “Shake IT Up – Tanzen ist alles” and the film “Beste FReinde” (both Disney Channel originals), has already done a lot in 2019 to break her teeny star image to emancipate.

Bella Thorne explains what prompted her to direct a pornography: “I got the inspiration for the film when I was talking about the relationship between men and women and this struggle for dominance and how it did in the real world apart from sex plays a role thought. «

Bella Thorne told the LA Times that she also wants to earn some money at OnlyFans for her production company and that she is collecting ideas for further adult films.

OnlyFans is a gold mine for celebrities

Last week, Bill Maher dedicated a portion of his Real Time monologue to the news that OnlyFans was banning porn—or as the company put it, “sexually explicit conduct.” The paid subscription service, which is dominated by sex workers who have seen their incomes rise dramatically during the pandemic, admitted that they reached the decision due […]